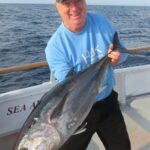 Toronado loads up yellowtail and rockfish

LONG BEACH —Waiting and watching as the boat crew worked to turn around Toronado for the WON two-day run just would not do for charter anglers. Instead, the fishermen jumped in to help with loading stores for the upcoming trip, making the hour of departure that much sooner.

Because the 75-foot sportfisher had been out on an over-night trip, returning a little late, owner Joe Philips and long-time skipper of the boat, Captain Ray Lagmay, made an extra effort to get away from the docks at Pierpoint landing as quickly as possible.

The group was filled with anticipation and excitement at getting going as tuna and yellowtail had been on the chew in recent days.

Anglers boarded and found their bunks, signed into the manifest and picked up a Frogg Toggs drybag holding a spool of Hi-Seas 20-pound fluorocarbon and a Gamakatsu G-Box 3200 utility case. The mega-sized spool of Berkley ProSpec Chrome Monofilament and spools of Daiwa J-braid were laid out for anglers to load up their reels, and several anglers took advantage right as Toronado headed out to the bait receiver. A gift card valued at $100.00 from HUK Gear was to be awarded to the angler with the biggest fish of the trip.

Clear skies and light winds made the run out a smooth ride and while night driver, legendary Captain Johnny Chastine, explained the plan for next couple of days, anglers got rigged up.

“Captain Ray says we are going to start at the east end of the Cortes Bank. Many boats have worked the west end but not the east,” explained the affable Cpt. Chastine.

“That means we will be fishing sardines fly-lined with small size-two hooks or adding a rubber band weight of 4-to-6-ounces, and of course whatever jigs you want to throw,” Cpt. Chastine continued. “We should arrive around daylight tomorrow.”

Anglers finished tying up the various rigs they planned to use in the next day’s fishing and headed for the bunks below deck, resting up for the big day to come.

Before dawn several anglers made their way to the galley and found owner Joe Philips filling in as cook for the trip. Philips had been up since 3:30 a.m. prepping for breakfast, not wanting to disappoint the guests. Breakfast burritos, plates of eggs and sausage and just about anything a hungry fisherman could want helped to get the day going in the right direction.

Toronado slowed and circled, easing to a stop, and Captain Ray let everyone know the boat was being set up for anchor on Cortes Bank.

Lines were let out with perfect, mid-sized sardines “butt-hooked” onto fly line rigs. Some anglers opted to tie on a small weight a few feet above the hook using a rubber band that could easily be removed to change tactics.

Changing baits often is key to fly-lined ‘dines. If the bait doesn’t swim or returns to the boat rather than bee-lining for the far coast, that bait needs to change.

First to draw blood was Big Bear angler Tony Dufault, who fished the weighted rig for a 17-pound yellowtail. Dufault had come out on the charter with his son, Robert, and a group of anglers from the mountain community.

Anglers Kevin Suinn and Tony Dufault fished deep and fund a matched pair of sheephead willing to eat their baits.

A surprise catch of a big, grumpy, calico bass came over the rail moments later for Simi Valley angler, Jake Cooper. Cooper fished with his dad, Shawn Cooper, with both anglers getting a share of the day’s bag.

Bill “Rail-master” Hergenroeder traveled down from Las Vegas to jump on the WON-Toronado charter. Connecting early on the first day he put the wood to a beefy mossback while working a red, Salas 6x, iron up in the bow, using the rail for added pressure on the big fish. Bill also bagged a good sized forkie on a lime green Salas jig, and bonito, whitefish and rockfish at Cortes Bank, to make a great cooler filled with fillets to take back out to the desert.

Santa Clarita angler, Saverio Simone, fishes aboard Toronado throughout the year. The San Fernando Valley angler always comes to fish in street clothes of dark slacks and a neatly pressed, white button-down shirt, almost like he’s heading off to work at the mortgage office that is his day-job. The WON charter was no exception and by trip’s end, the shirt was bloodied and stained, never to be worn on the streets again. Simone says he wears the outfit to try to bring back the old “Catalina Tuna Club” look of bygone days.

Bonito were in ample supply with the mid-sized fish tearing through baits and jigs like they’d been starved for days. Anglers wanting action, and to fill sacks with the silvery brutes had all they could handle on day one.

Yellowtail made a good show of it at the Cortes and, while it was a pick bite all day, better grade forktails found their way into sacks for anglers willing to make changes and find the right combination.

At the “Bank” the question was whether to use light line and small hooks to get bit, and risk getting broken off by larger model yellowtail, or go heavier and possibly miss opportunities because fish were line shy. Both were tried and those able to fish the lighter tackle well, not only got bit, but landed more fish of larger size.

John “JT” Torres found that fly-lined ‘dines the best option and the angler sored a 20-pound-class yellowtail that went on to win jackpot for day one.

“Los Frijoles” fishing club founding member, Mondo Torres, had come out with his “Fishing Son,” William Ha, and Torres appeared to be the hot stick with his share of yellowtail on both days of the trip. In fact, it was Torres’ forkie that took big fish jackpot for day two and won the $100.00 gift card from trip sponsor HUK Gear for heaviest fish overall, with a 26-pound mossback.

The first day rolled-on until, by early afternoon, Captain Ray called for lines up and announced plans to work deeper waters for rockfish along the Cortes Bank further to the west.

Setting up in 200-feet of water jigs tipped with squid and double dropper loops offering squid strips were run down to the bottom. Throughout the afternoon the usual assortment of rockfish, along with some huge ocean whitefish filled sacks for charter anglers.

Shawn Cooper pulled in a chucklehead that rivaled the size of any before seen aboard Toronado. The massive rockfish looked to be near a world record for line-caught chucks. Several more sheephead were boated as well, and late in the afternoon Captain Ray called for lines up once again. This time the move would take several hours as Toronado headed to the bluefin tuna grounds just south of San Clemente Island, where larger grade fish had been taken in recent days.

While Toronado ran the distance towards SCI, owner Philips did a fantastic job of preparing steak dinners with all the trimmings.

With dinner completed and the distance covered, Captain Ray slowed Toronado amid a cluster of some 30-boats already stationed around the bluefin zone. After a bit the drift was set up and heavy gear with all manner of Flatfall, SK knife, and other assorted iron was run out into the depths. A couple of hours passed with no fish even giving a look at all that hardware, so it was “Lines up” once again and the overnight move to the inside shores of San Clemente Island.

Most anglers headed to their bunks as Toronado headed north, but a few hardy souls chose to spend the time dealing cards in the galley into the early morning hours.

Daybreak saw Toronado rounding the east end of SCI and making way along the inside shoreline. A few stops yielded little action until Richard “Porkchop” Goforth connected with a fly-lined ‘dine-eating yellowtail. Few other fish took baits along the shoreline when Captain Ray made the call to head out to spot near Mackerel Bank, a few miles off SCI to the north-east.

“You’ve really got to pull on them or they’ll head for the kelp and bust you off,” explained night driver Cpt. Chastine while Toronado was set up on the first spot. Often helping out on deck, Cpt. Chastine would toss iron and connect with yellowtail, only to hand them off to anglers new to this style of fishing.

“Pulling on them” sometimes led to breakoffs and lost fish, making the landing rate less than it might have been. Kelp, rocks, light line, heavy line. With so many choices the equation can become boggling, balancing strength with skill.

Long soaks led to more yellowtail hitting the deck for anglers able to handle the hard-hitting fish, successfully completing the puzzle. Fishing alongside partner Han Yoon, Angler Yong Yoon seemed to have a rhythm of catching a bird or two and then a mossback, adding to his sack throughout the afternoon, releasing the birds and keeping the ‘tails.

The final call came, and the time drew on for the more than five-hour run back to Pierpoint Landing. Gear was stowed, anglers headed for showers and bunks. The fish were pulled out of the new refrigerated seawater hold for deckhands Cameron and Santiago to cut and fillet during the ride home.

The many years I have spent running my own business gives me a unique perspective on managing projects and creating effective programs. Coupled with the ten years I have been writing for Western Outdoor News these experiences have allowed me a set of skills perfectly suited for the OWAC Board of Directors. During my tenure as OWAC Vice President we have achieved substantial progress in the way OWAC operates and how we serve our membership. These contributions have been some of the most enjoyable and rewarding experiences of my professional life. The further development of the craft awards program, working with each successive chair person, is among the many progressive developments I have accomplished as a volunteer on the OWAC Board. My interest in making OWAC work better, adding value both professionally and personally for each member, is the driving force behind my desire to stay aboard and complete initiatives recently begun. I seek your vote for re-election to the board so I may further the cause of OWAC and its membership and help it to continue to build as a unique, and outstanding, professional organization.
Author's Archive
Author's Website