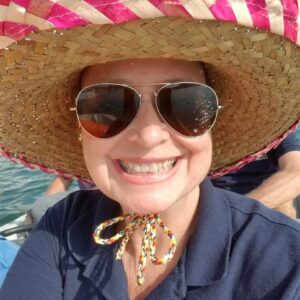 Lost and Found – The Search for Photos on the Road

For the past decade, my boyfriend and I had ventured on many long-distance road trips, devising new routes from Southern Arizona to Central Alberta, making two loops around lower British Columbia and one trek down the Pacific Coast.

There were two options for taking pictures during our travels – either hanging out the truck’s window at 70 miles an hour or attempting to take a decent cell phone shot through the window (usually in inclement weather) without capturing interior reflections or an exterior windshield wiper. Or without being photobombed by a bug. Or bug splat. Or a tree. All while lamenting the lack of stops and bemoaning the magnitude of spectacular images abandoned on the side of the road.

On the most recent road trip to Sonora for the OWAC conference, I enthusiastically plotted a solo expedition into Yosemite and beyond. I would be free to stop when nature, hunger, or natural beauty beckoned. For a few days, there was no schedule to meet, no miles-per-day requirement.

Of course, that meant leg one of my journey was a straight shot to Fresno. After three hours, my Kia Forte recommended a break. But highway signs alerting drivers of incoming fog kept me rolling. The following morning, I took the lingering fog as a sign. Nothing to see here; keep moving.

Through the years, I’d become increasingly fascinated with small towns, particularly those dilapidated or abandoned with shuttered stores and long inoperable, overgrown industrial yards. Certainly, with a little digging, there were stories there to be told. But alas, none were to be found along the still foggy drive. Minturn held no gold, Le Grand was not, and Planada fell flat.
Mariposa provided a delightful break, and I was quickly lured into the Pizza Factory by a well-worded neon sign. But construction cones destroyed the potential for a tourist-town photoshoot. Besides, the higher elevation saw a clearing sky and the anticipation for Yosemite’s mountains grew.

But miles before the mountains, I found the river. On the map I’d studied, it appeared as a wavy blue line that gently wove its way through the park. In-person it was a bubbling rocky racetrack flanked by a boring asphalt access road. With nowhere to park.
Sure, there were a couple of turnouts for slow vehicles, but nothing safe for a stop. Multitasking out the window was out of the question. I said goodbye to photographic possibilities and reluctantly tried to enjoy the drive.

Minutes after passing through the park gates, with rocky peaks and cliffs now jutting over the horizon, I found the first pullover stop of the day – directly above the glowing Merced River. A breath of fresh air mixed with the sound of trickling water reinvigorating me, and I was off. For another 500 yards. Only to gleefully stop again, and again.

Two hours and at least six stops later, I pulled into a long line of parked cars and gazed across a barren field to find the spectacular Yosemite Falls in the distance. I set across the field with no particular destination in mind yet pondered my timing. Had I arrived too late? Was it going to be too dark too quickly? Then I found the river. And magic. And I was right on time.

Although I continued to mourn many other missed shots – especially down Highway 120’s hair-raising five-mile hairpin drive, I realized two things. Nothing seen along the way is truly missed. But the company of my favorite cohort was. And successful journeys are more than what’s brought home on a memory card. It’s the memories of how we felt in those exhilarating moments and the simple understanding of how fortunate it was to have simply been there.

After writing a spec article about emerging best safety practices at a marina, The Log Newspaper published my work and hired me. It was the beginning of a 20+-year career in the boating industry. Covering all things boats, I worked my way up to become the bureau chief for two SoCal counties and developed a love of yacht racing. For the past six years, I have lead PR efforts for the Newport to Ensenada International Yacht Race. My press releases are often published verbatim, alongside photos.
Author's Archive
Author's Website: https://www.nosa.org