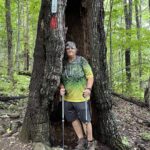 I have been a member of OWAA for a long time. That is how my husband Randy and I met Carrie Wilson, the esteemed OWAC president, and her husband Jeff. While attending the OWAA conference in Vermont in the early fall of 2021, we all enjoyed the storytelling session in which members shared life-changing experiences. Carrie obviously enjoyed it so much that she initiated a similar session at the OWAC meeting held just weeks later in Sonora. I attended that fabulous conference as a new member and was asked to participate in the storytelling session. The following article memorializes my “story,” which I dubbed “When in Rome.”

I haven’t had a real job since 1998. Let me explain why and tell you how that is all working out.

Professionally I wear several hats. By training, I am an historian with a master’s degree in public history. However, I am also a journalist and have been since high school and college.

Way back last century (1981 to be exact), I was fresh out of college and newly married when I landed my first full-time job with that history degree…as an assistant sports editor with a daily newspaper. It was great – taught me good, succinct writing, reporting, editing, and layout. Back then, the sports desk also handled hunting and fishing, and outdoors writing in general.

Then in 1988, I landed a job at a newly opened living history museum so I actually got to use the history degree as a research historian, while still freelancing in sports and outdoor writing. Within a few years, I had published a bicycling book and a history book and was a partner in a publishing company called Lot’s Wife Publishing (that’s another story but rest assured it has nothing to do with Sodom and Gomorrah!)

All was not rosy at the museum, a state agency subject to political tug of wars and questionable management decisions. Metaphorically speaking, I was digging an escape tunnel to an unknown exit. Then in 1998, there was a life-changing event.

On a whim, I applied for a Rotary International Group Study Exchange trip. Six people from our region would be chosen as cultural ambassadors, each representing our profession and our community. If selected, I would be part of a team receiving all-expenses paid trip to Hokkaido, the northern island of Japan, for five weeks.

Amazingly, I was among the six chosen for the team representing the Shenandoah Valley. We spent several months learning a smattering of the language as well as social mores before heading off on our big adventure in May of 1998.

By day, we were together visiting places such as factories, museums, and schools. At other times, we were each with our own families who spoke limited English. Here are some examples of how unsettling this could all be.

Take toilets. In public, the Japanese have squat toilets – sort of like a urinal laid flat in the floor, forcing the user into the most tortuous of positions (as judged by western standards). In private, the Japanese had western type toilets with so many bells and whistles that they came with control boxes rather than the traditional handle for flushing. These control boxes had Kanji characters for different functions such as “big flush,” “little flush,” and “flushing sound.” On my first night with my family, I actually had to ask how to flush the toilet!

Toilets were the least of our problems. There was learning to eat with chopsticks, remembering to take our shoes off before entering houses, and eating whatever was served, even if it meant pretending to enjoy the octopus pizza topping and the bowl of pickled fish that resembled the guppies in my fish tank way more than I wanted to admit. Our adage was, “When in Rome, do as the Romans,” as we tried to respect the customs of the land where we were the outsiders.

Many evenings were spent giving a team presentation – in Japanese—to Rotary groups. Each of us had four or five slides (this being pre PowerPoint) about ourselves in that program. Although we were far from proficient in the language, our audiences seemed to appreciate our efforts at giving the program in their native tongue, i.e. practicing the “When in Rome” rule.

In my small part of the program, I had slides of my work, my home, my husband and other family members, my dog, and my cat. When the slide of my cat, sitting very regally on our deck railing, popped up on the screen, I said (in Japanese) “This is my cat. He thinks very highly of himself.”

That slide in particular always brought a chuckle from my audience. About two-thirds of the way through our five-week visit, a young American married to a Japanese woman was assigned as our interpreter for a few days. After our program, he pulled me aside and gently explained to me that when talking about my cat, I had slightly mispronounced a word that was very similar to another quite different word.

Turns out that instead of saying, “My cat thinks very highly of himself,” I was saying, “My cat is penetrating himself.” Hmmm, no wonder I was getting a laugh. I practiced the correct pronunciation, but I could never bring myself to say that phrase again. For the rest of the trip, I punted and just said, “This is my cat,” and moved onto the next slide.

Suffice to say, the trip was life changing. I learned to think on my feet, survive being outside my comfort zone, and embrace the adventure that comes with immersing oneself in another culture, even if it means a little embarrassment.

I had not been home long before I realized that the tunnel I had been digging to escape the frustrating job was now complete. Within four months, I quit my job and have not had a time clock punching, traditional job since 1998.

That doesn’t mean that I haven’t been busy, but it means that I am my own boss. Moreover, consider this: If I hadn’t decided to take a leap of faith and go way outside my comfort zone way back last century then I would not have quit my job. In addition, I wouldn’t have joined the Outdoors Writers Association of America. And I therefore would not have met Carrie and Jeff. And I therefore would not have joined OWAC and I would never have had either the nerve or the life experiences that brought me in front of a group of California Writers telling them about my cat who thought very highly of himself…or whatever it was that he was doing…

I have been a journalist and photographer for more than 40 years. I am a self-employed freelance writer for magazines and newspapers -- my main outlet is the Waynesboro News Virginian (a daily newspaper). I have been the editor of the award-winning Virginia Native Plant Society State Newsletter for more than 25 years. I also co-own a small publishing company -- Lot's Wife Publishing. My work focuses on outdoor activities (hiking, biking, etc.) and environmental advocacy.
Author's Archive
#