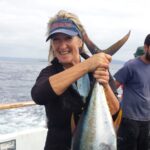 At 630pm the 47-foot sailboat El Gato entered the Atlantic Ocean, for the first time in her existence. Previously owned by an Italian couple, the catamaran had been a Mediterranean girl all her (known) life. And now, abreast the fabled city of Tarifa, she poked her bows into the Atlantic. ‘Although it kept pushing her back with a strong current, forcing us close to the green, pastoral coast of Spain, with its rugged bastions and alabaster estancias; dodging the smaller fishing boats to starboard, while a cavalcade of ships converged to port.

The wind, as opposed to the forecast light easterly, was on the nose; the seas choppy. When I finally took a nap I was mostly airborne and the waves smacked angrily against the hull. As if that wasn’t enough, shipping traffic at this confluence of commerce and culture was bedlam. The AIS chimed incessantly: we had to turn it off. We cruised under headsail and main but kept our engines running for maneuverability. Ships were coming and going from all points, squeezing toward the shipping lanes, and for several hours it was a corridor of hell.

In fact, for centuries charts indicated here ‘non plus ultra’ (nothing further beyond): a warning to mariners to go no further. Plato referred to it as the edge of the unknown. This was where Hercules, intended to cross a mountain, instead smashed it in two, hence the Pillars of Hercules – Gibraltar, on the north and Monte Hacho* on the African continent to our south – opening the Mediterranean Sea to the Ocean of Atlas. (*although some lore says it’s Morocco’s Jebel Musa)

The significance of Tarifa

Gibraltar had fallen astern, and a plume of clouds trailed off Monte Hacho, as we approached Tarifa.

Many years prior – 17, in fact – Susan, a friend and editor, had bid me up to San Francisco to interview at Quokka Sports. “Get your ass up here, they’re hiring writers and paying real money,” she urged.

Arriving in San Francisco, I spent the evening with Susan and another interviewee, Neil. After the free happy hour at the hotel we went to a massive bookstore nearby, to muse among the literature (that’s the sort of thing writers do for fun). Neil and I decided to select something from the enormous inventory, for the other to buy. We looked at volumes of books and listened to scores of cds. I can’t remember who chose what, but one of us selected an exotic album “Radio Tarifa” and by some quirk, the other chose the book “The Alchemist” – which begins in Tarifa. Although I never knew where Tarifa was, the coincidence was ominous, and to me it has remained a mystical place. And last night, there I was: off Tarifa. We sailed close, and even tucked in to the lee of the ancient fortress to raise our main. The lighthouse flashed repeatedly astern, late into the dark morning, bidding us adieu.

There were other portents on our trip as well. A brilliant rainbow burst from the powder puff clouds over Sierra de Cabrito. And a small bird flew into the main salon, fluttered around, and flew out … but kept us company some of the way as we continued on, motor-sailing in faint breeze beneath hazy skies off the coast near Casablanca, en route to Lanzarote some four days away.

First hired by a boating news editor in 1995 “against his better judgement” Betsy Senescu has been photographing and writing about boating and the marine environment ever since. In that time she’s sailed more than 50,000 miles (including three Transpacs), traveled on assignment to six continents, done grocery shopping in seven languages, and caught hundreds of fish, but never once attempted to hula (she knows better). Betsy lives with her darling new husband Barry in SoCal, where they race their Class 40 Yippee Kai Yay.
Author's Archive
#